And here's the cover. 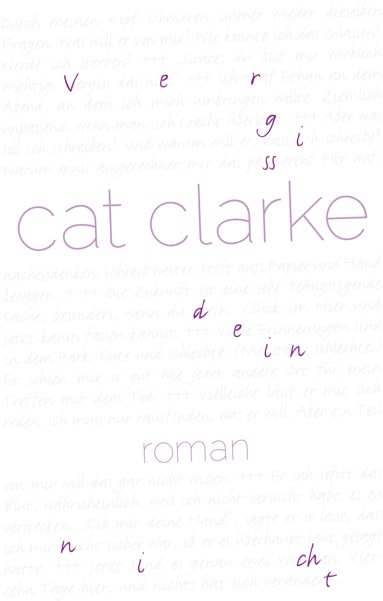 The words in grey (which have come out way too faint here) are all lines from the book, and the letters of the title will be cut out and you'll see through to a purple flap behind. And 'roman' means 'novel'. My lovely German publisher, Lübbe, is going for a crossover audience with this cover and I FREAKING LOVE IT. I love the white, I love the purple, I love that my words are on there... and look how big my name is?! Eek.


Way back before I had a book deal, before I'd even finished the book, I used to daydream about what the cover would be like. And this is pretty damn close. I can't wait to see it in real life.


So what do you guys think? Pretty different from the UK version, yes?
Posted by Cat Clarke at 9:22 AM 6 comments:

So here's a link to a Publishers Weekly article by two YA writers who were offered representation... on the condition that they turned a gay character straight. Not cool, right?
Having worked in the publishing industry for a few years I feel I can quite confidently say that this kind of thing happens ALL the time. The agent in question may well have nothing against gay characters in a book, but they may think that editors will have a problem with it, and the editors may think that Sales & Marketing will have a problem with it, and Sales & Marketing may think that bookshop buyers will have a problem with it, and bookshop buyers may think that customers will have a problem with it. You see the issue here? Everyone trying to second guess everyone else. The status quo is maintained.
Here's my plea: ENOUGH WITH THE SECOND GUESSING. Give people a chance to make up their own minds. Simple.
I have a great deal of respect for the two authors in question for refusing to 'straighten' their gay character. I reckon a lot of writers would feel they HAD to, in order to sign with an agent.
So what about you? What would be your deal-breaker? What would you do if you were asked to change the sex/race/sexuality of a character in your manuscript?
Posted by Cat Clarke at 8:42 AM 12 comments: