The Demi-Monde and The Jam Factory

Thanks for all your lovely comments about TORN. In all the madness surrounding ENTANGLED I keep forgetting that I have this other book coming out next year.﻿ Lots of people have been asking me if it's a sequel to ENTANGLED and I hope they're not too disappointed when I tell them it's not. I must admit though, these questions have got me thinking about the characters and what happens to them after the last page of ENTANGLED. But for now... I'm saying nothing.
Here's a book recommendation for you. It's a book for grown-ups! I haven't quite finished it yet, but I am loving it and I think the premise is mind-blowingly awesome. The description below is from Amazon. Click on the cover to take you there. 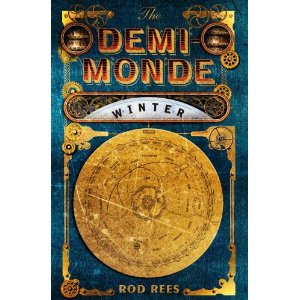 EXPERIENCE THE ULTIMATE IN VIRTUAL REALITY.

The Demi-Monde is the most advanced computer simulation ever devised. Created to prepare soldiers for the nightmarish reality of urban warfare, it is a virtual world locked in eternal civil war. Its thirty million digital inhabitants are ruled by duplicates of some of history's cruellest tyrants: Reinhard Heydrich, the architect of the Holocaust; Beria, Stalin's arch executioner; Torquemada, the pitiless Inquisitor General; Robespierre, the face of the Reign of Terror.


But something has gone badly wrong inside the Demi-Monde, and the US President's daughter has become trapped in this terrible world. It falls to eighteen-year-old Ella Thomas to rescue her, yet once Ella has entered the Demi-Monde she finds that everything is not as it seems, that its cyber-walls are struggling to contain the evil within and that the Real World is in more danger than anyone realises.

HOW GOOD DOES THIS SOUND?!

In other news, I'm moving into my new house (a.k.a. The Jam Factory) this week. I'm currently wavering between panic and excitement. So. Much. To. Do. But I'm going to have my own front door and a stripey rug in the hall and a couple of vegetable patches in the garden. That's what I have to focus on (rather than the chaotic lists of Things To Remember and Very Important Stuff).

I hope this week is treating you all kindly.
Posted by Cat Clarke at 9:09 AM 5 comments:

Oops. Forgot to tell you that book two officially has a NAME. You might have already seen it if you're on Twitter...


TORN
﻿So what do you think? I like it lots. And unlike ENTANGLED, I actually came up with this one. Hooray!
Here's what the book is about:
The most popular girl in school is dead. Everyone thinks they know the score, but only Alice and her friends know what really happened to golden girl Tara.  But Alice starts to doubt her own version of events when, haunted by visions of Tara, she realizes the truth is much, much darker. And she's the only one who wants to uncover it.
All being well, TORN should be published in January next year.
Posted by Cat Clarke at 8:48 AM 12 comments:

The Great Entangled Book Tour is over.

I visited ten schools.
I met some incredible librarians and teachers and lots of brilliant students.
I drank approximately twenty gallons of water, four gallons of tea and one gallon of gin. (Just kidding about the gin... honest.)
I ate one spectacular cupcake (thank you, Library Mice!).
I was given a plant and a card and a folder full of picture books written by students (thank you, Queens Park Community School!).
I signed copies of ENTANGLED, exercise books and scraps of paper.
I apologized for my rubbish handwriting many, many times.
I laughed a lot.
I nearly cried (once).

And now it's over. And I kind of miss it (apart from the crazy early mornings). Thanks to all the librarians and teachers and students for being so lovely and not throwing things at me. And thanks to Niamh at Quercus for being awesome. (Please bear in mind that she had to listen to my spiel over and over and over again. A fate worse than... something quite bad.)

Now onto the next challenge: The Great House Move of February 2011. It's going to be epic.
Posted by Cat Clarke at 9:11 AM 12 comments:

YES! The spectacular boy band responsible for this little number back in the year 2000. I like to think that this video proves the old adage that BOY BANDS ARE BETTER WHEN WET.

Anyway, where was I? Oh yes, I went to visit a couple of schools on Wednesday with a couple of lovely ladies from Scottish Book Trust. I am now a bit ill. (Not saying that the two are connected... just sayin'.) I went to St Augustine's RC High School in Edinburgh and Dunfermline High School (in Dunfermline, obviously). If you head here, you can check out some pics.

So the whole day was a total blast. The students were lovely and welcoming and asked brilliant (and sometimes downright hilarious) questions. I got to have a chocolate brownie at lunchtime, which is always a bonus. And I think I may have overcome my school phobia. Perhaps this helped... 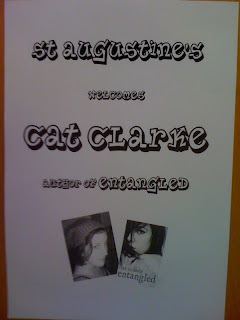 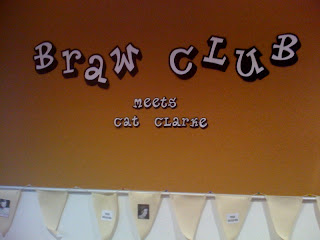 And here's a close-up on the bunting. BUNTING! With my face on it! St. Augustine's has made a friend for life here. 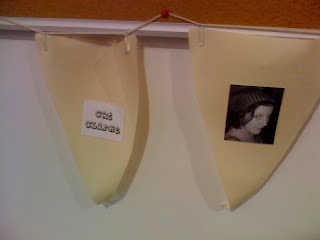 I'd like to say a big fat thank you to Scottish Book Trust and to both schools. The day was approximately 253% better than I could have ever imagined. THANK YOU!
Posted by Cat Clarke at 9:47 AM 7 comments:

No, not the 90s boy band responsible for this little gem...

A classic, right? But I digress... tomorrow is the start of the Great Entangled Schools Tour. I am being let loose (you see? LET LOOSE!) on the nation's schools. Crazy biscuits.

I realized this morning that I haven't set foot in a secondary school since... well, since I left secondary school. I may be ever so slightly phobic about them, so that should be interesting. I shall endeavour to report back if I make it out alive.

Any pearls of wisdom would be much appreciated.
Posted by Cat Clarke at 9:17 AM 7 comments: