Hey folks, hope you're enjoying the festive season. I am mostly enjoying it by being ILL. Urgh. Still, it means I'm getting a lot of reading done, which is good, since you lot have added heaps of books to be TBR pile with your awesome recommendations.


Here's what she had to say about her favourite YA book of 2011:


Mine is DARK INSIDE by Jeyn Roberts. It's a story that takes places during the apocalypse and it truly terrifying. The reasons it stands out for me are, first, the 5 POVs, one of which is philosophical and sad and scary all at once. The second reason is that even though the book did scare me, it also had something to say about human nature, and about the things in our very real (read:not paranormal) world that SHOULD scare the bejesus out if every single day. I don't know what I was expecting when I opened this book, but safe to say it blew my mind out the back of my skull and left me thinking about it for day's. First book in a while that, if there had been a sequel available, I would have run right out and bought it.


I will definitely be getting my hands on this one - sounds exactly my cup of tea. Also? Five POVs? Impressive. So, Trisha, please get in touch with your address so I can send you Nova Ren Suma's bloomin' amazing book.


So what are you reading at the moment? I'm reading THE WOMAN IN WHITE, by Wilkie Collins. It is masterful.
Posted by Cat Clarke at 10:29 AM 4 comments: 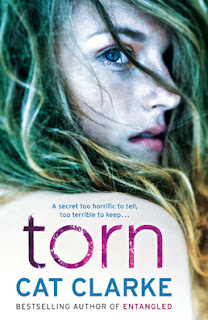 I'm kind of proud of this one. Writing it was not easy, but it turned out pretty much exactly like I wanted it to. I do hope you like it.


To celebrate the occasion, I'm giving away a copy of my favourite YA book of the year. It's this little beauty... 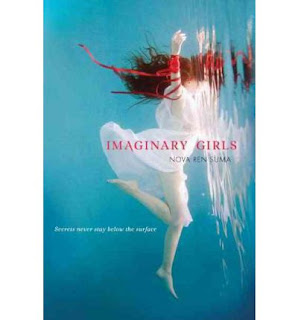 To be in with a chance of winning the unbelievably awesome IMAGINARY GIRLS, just leave a comment telling me your favourite YA book of the year, and tell me WHY it's your favourite. I'll pick a winner at midday on the 27th. The contest is open worldwide.


I'm muchly looking forward to picking up some recommendations to add to my somewhat intimidating TBR pile.


I suppose I'd best get on with the celebrating then. This morning it involves drinking tea and taking Griffpup for a walk. Exciting times, yes?
Posted by Cat Clarke at 6:42 AM 24 comments:

Two days to go... and a contest winner in a pear tree

It's Tuesday. TORN comes out on Thursday. Clearly watching panda videos on YouTube is a valuable use of my time.


So we have a winner in the guilty secret contest. There were a lot of awesome entries. Quite frankly, you lot have shocked me. I'd never have guessed my 'lovely' blog readers were such a shady lot. The winning entry jumped out at my straight away, mostly because I immediately thought That's something I would SO do. Also, the addition of a smiley face at the end of the confession made me laugh. Smiley faces negate evil deeds, don't you know?


Here's the winning entry in all its glory:


It's Christmas themed as well, we lie to our respective families every year & tell them my husband is on call for the hotel he manages & we can't go to Christmas dinner with either of our huge families in a stuffy restaurant. Then we stay in our pj's & have beef Wellington for dinner then go for a walk. Aaah. Even better, his boss is in on it & covers for us every year :-)


Congratulations to Sarah Writes! Please get in touch with your address so I can send you a signed copy of TORN. Enjoy that beef wellington, and don't let the bitter taste of guilt taint your enjoyment in ANY way.


Now, back to those panda videos.
Posted by Cat Clarke at 6:44 AM No comments:

ONE WEEK TO GO... THE CONTEST

One week. Eek. Also, that means Christmas is crazy soon, and I am nowhere near ready. (And if I hear one more person who says they finished all their Christmas shopping in September I may punch something).


So in honour of my little book coming out next week, I thought I'd host a little contest. The first contest anywhere in the world in which you can win a shiny finished copy of TORN. It's a proper book! With the exact right words in it!


1. Contest is open internationally.
2. Contest closes midday Monday, UK time.
3. If you spead the word, you won't necessarily be more likely to win, but the karma alone will make it TOTES worth it.


To enter, just answer the following question in the comments below...


*See what I did there? TORN is all about guilt and secrets and guilty secrets and secret guilt... CLEVER.
Posted by Cat Clarke at 6:31 AM 29 comments:

So there's this book coming out in TWO FREAKIN' WEEKS and I've heard all kinds of good things about it, including (but not limited to) the fact that it has PAGES and WORDS and a cute guitar-wielding boy and a black cocker spaniel and a very mean girl. Whaddya reckon? I think I would probably buy it, if I were you. If you don't fancy reading it, you could always use it as a frisbee or to shield your new hairstyle from an unexpected shower of rain. 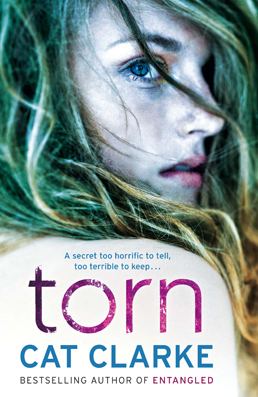 I'm thrilled to bits to be hosting a stop on Nicola Morgan's blog tour. If you don't know Nicola, I can assure you that she is a) lovely (not in the least bit crabbit) and b) an incredible writer. MONDAYS ARE RED was Nicola’s debut YA novel, published in 2002. Nicola is now delighted to be producing the ebook herself, with a new cover and extra material, including creative writing by school pupils inspired by the book. For details about how to buy (price around £1.99 until the end of January), have a look here. Also, you can go follow Nicola on Twitter here.

About the book
When Luke wakes from a coma, his world has altered. Synaesthesia confuses his senses and a sinister creature called Dreeg inhabits his mind. Dreeg offers him limitless power – even the power to fly – and the temptations are huge, but the price is high. Who will pay? His mysteriously perfect girlfriend, with hair as long as the sound of honey? His detested sister, Laura, with the wasps in her hair? When Laura goes missing, Luke realizes the terrible truth about himself and his power. His decision is a matter of life and death, and he will have to run faster than fire.

Hello, Cat and thank you for letting me invade your blog today! You’ve asked me to talk about the theme of guilt in MONDAYS ARE RED. Yes, it’s a major theme. But then I thought about my other books and realised that guilt is a pretty major theme in most of them! Yikes. I’d better keep the psychoanalysts away… Oh, and to be clear: I’m talking about the emotion of guilt, not the factual aspect of whether an accused person is guilty of the crime. It’s the emotion that’s far more interesting.
In Mondays are Red, Luke’s feeling of guilt comes from the way he abuses the absolute power he develops after a coma, led into temptation by a devil-like creature in his mind. Once he discovers the nasty side of himself that he didn’t know existed, it rocks him. In WASTED, my latest novel, Jack’s guilt is surely undeserved. He has twice caused the death of his mother, but through pure bad luck, albeit that the deaths would not have occurred if he hadn’t been there. Subconsciously, he is altered by this guilt. In BRUTAL EYES, the novel I’m currently writing, Joe is guilty, in every sense – he’s killed a man. And he knows that he can only live with himself – or live at all – if he atones.
Why does guilt work so well in fiction? I think guilt is one of the most awful feelings. I assure you I haven’t done anything major to be ashamed of, but I have an imagination! I’d rather be victim than guilty party. Unless we’re perfect – and I’m far from it - we’ve all felt a bit ashamed, so we can imagine what huge shame must feel like. It would keep you awake at night, gnaw away at you, damage your self-esteem. So, there we’ve got an emotional pull for a novel – something that affects the main character and also makes us empathise with them. We’ve also got motivation for the character to do something stupid – because guilt can drive people to cover up, and that can have bad consequences. Or it can drive them to atone. So guilt can be a motivator for bad or good, and it’s such a powerful emotion that it can lead to extreme actions. Useful in a novel!
In Mondays are Red, Luke says, “However much of it was my fault, it didn’t matter any more because I had made it right in the end.” Joe in Brutal Eyes learns something different about guilt: you have to do more than pay for it; you have to let it change you. Luke and Joe discover that you can move on from anything. Luke says, “Grandpa told me that we have space in our brains to store some radioactive waste quite safely. Eventually it loses all its poison. You grow away from it, start again.”

It certainly provides great scope for novels. I’m sure everyone can think of novels with guilt as their core, but my favourite example is ATONEMENT by Ian McEwan. And TORN is about guilt, isn’t it? Which reminds me, must go and buy it…
Thank you for having me! I’d love to hear other readers or writers thoughts about guilt. (In fiction, I mean – no confessions please!)
Thanks for a fascinating post, Nicola! Guilt is one of my very favourite things to write about and to read about. So, lovely readers, what do you think about guilt? Any favourite guilt-ridden books you'd like to recommend?
Posted by Cat Clarke at 7:30 AM 1 comment: